May is a month of birthdays in our family, and it all started with E’s second birthday. Obviously, I made a cake; I love making birthday cakes for my children, and it is a tradition I really want to continue as long as they want me to – you can see some of my previous creations here!

It was clear that this specific cake had to be train-related, as they are most definitely E’s favourite things. But, having given it some thought, I decided that it had to be a track of some sort (preferably in a number ‘2’ shape), rather than a train itself. I found a few ideas scattered around the internet, put all the best bits together, and voilà, this was my morning’s work:

And, if you would like to recreate this masterpiece in your own home (I mean, why wouldn’t you?!), here is a step-by-step guide (no moulds or anything like that needed; Paul and Mary would be proud!):

(I loosely followed this simple way of making a number ‘2’ cake, which advised making a round sponge and a square sponge. However, I only have round tins, and so round tins I had to use. Admittedly, a square tin may have made it slightly easier, but it worked fine without). 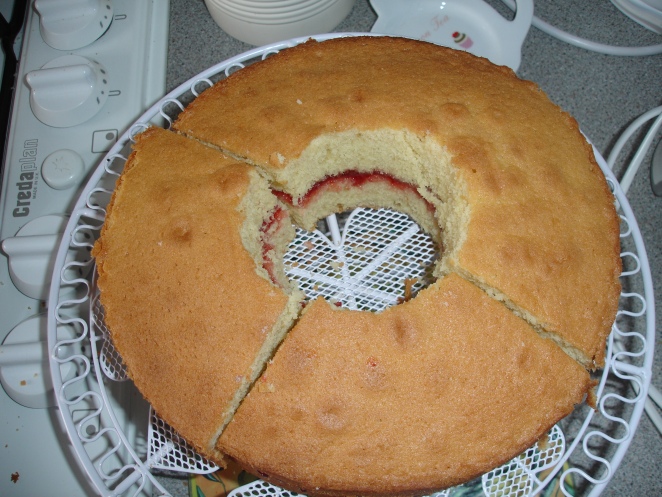 This is where a square tin (or indeed, a slightly larger round tin) may have been better. The rectangle I cut was slightly too small and so I had to fill up the space by cutting further bits off the offcuts. However, once iced, no one will know!

Also, as you will see, this particular cake had a wonderful background made from green and blue royal icing, thanks to D.

You have to understand that a lot of thought went into this icing, so much so that it changed three times as I was making it: I initially thought I would just do it plain white, with vanilla extract, but then saw blue food colouring in the cupboard and decided to make it blue to look like the sky. However, I ran out of food colouring before it was complete, and, before I had chance to run to Sainsbury’s, spotted some cocoa powder in the cupboard and decided that a ‘mud-look’ would be the way forward, so added that too. I dread to think what it tasted like to actual people, but everyone was suitably complimentary about it / being too polite to rubbish my day’s work.

I used Fizzy Cola Lances for the sleepers and Cola Laces for the rails, added one of E’s trains (Edward, number 2, of course) and, with D’s help, made a few embellishments from royal icing. D did manage to put me to shame by contributing an entire moorhen family, complete with yellow beaks and even the red bits. 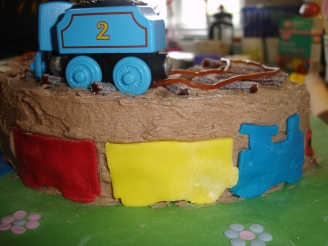 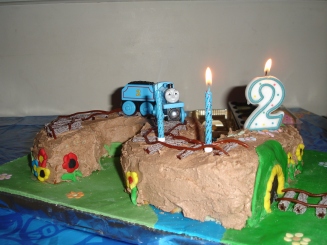 10 days later it was D’s turn for a birthday, and he, luckily, was happy with this mess:

It was a ‘Mrs Solomon’s Chocolate Cake’, simply iced with melted chocolate and decorated with Smarties. This is literally the simplest cake I have ever made and it is a perfect cake to make with toddlers! It looks a complete mess but I think it tasted ok!