I was very lucky growing up as our garden backed onto a playing field; we spent almost every summer evening playing football and cricket, whilst still being in sight of the house. I want this for my own children eventually, but I realise that we are probably quite far off such a situation at this present time. We don’t have a very big garden in our current house, not much more than a small yard really, so we are limited in what we can do. At the moment we stick to small yard games and for anything else we have to go to the park. And whilst we do go to the park regularly, on an almost daily basis in fact, there is just something so nice about being able to go out and play in the garden: no worrying about the changeable weather, packing endless snacks, or locating toilets for a start! Now that summer is supposedly here I have been wondering how to increase the variety of garden activities/games that we have, and this week decided to actually make one! We took our craft time outside and created our own, very small, bowling alley.

I had three empty plastic bottles of a similar size and asked A and E what they would like to do with them, to make them a little bit more interesting for our game. I had a variety of ideas, ranging from simply adding coloured water, to covering them in foil, to extravagantly decorating them somehow. “Turn them into animals” was the unanimous response, and so we set to work; it ended up being quite a project!

We started by covering the empty plastic bottles in tissue paper so that we could paint them later, because this is what Mister Maker does and, quite honestly, it is a revelation: it is definitely up there as one of the most important things that I have learnt from CBeebies. We left them out in the sun for a while, and when they were completely dry we got out the paints. 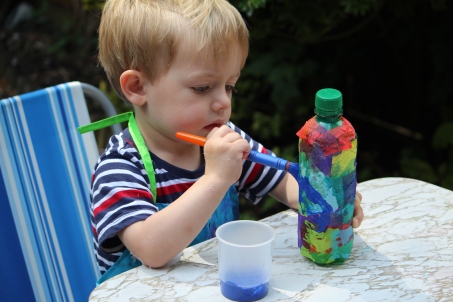 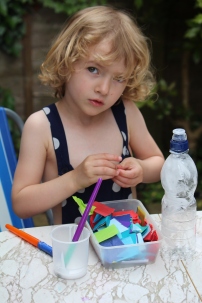 A wanted to paint one of the bottles pink (to be a pig), and E wanted to paint one blue (I wasn’t quite sure what animal he had in mind, but he was adamant that it had to be blue – no arguing there). They both worked with so much concentration. In the photos that I took it doesn’t look like they were enjoying themselves at all, but I hope they were; they were very proud of the results at least. Neither of them were particularly interested in painting the third and final bottle, so I did that myself – I painted it white and decided that it would be a sheep. 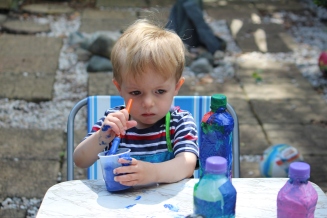 Once the paint was dry we could add the finishing touches. A decided that she preferred the idea of making a sheep, so added cotton wool to the white bottle, along with googly eyes and a face made from card (that I roughly drew for her to cut out). E decided that his would be a bird and so added feathers to his blue bottle, along with googly eyes and a beak made from card. I finished off the rejected pig by painting on a snout and some ears, and gluing on some googly eyes.

And voilà, these were the finished products:

Then it was time to play! I filled each bottle with water, in order to weigh them down a little as it was quite windy, and I told A and E to each choose a ball. We arranged the skittles in a triangle and I explained the rules of the game. Then they went for it! They both managed to knock quite a few over, and loved going back and picking up what had been knocked down so that the next person could take a turn! It was lovely watching them play so nicely together. 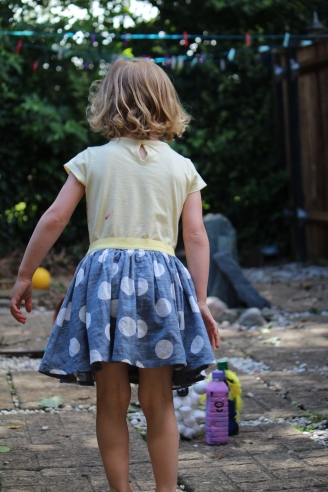 This game could easily be adapted for older children as well. I only had three plastic bottles, and even that was too many to keep my little ones engaged during the making process, but older children could make many more: a normal game has ten skittles I think. There is also so much more decorating potential! Older children could also make score cards, and then keep a proper score during the game: skittles is usually played over ten rounds, and winner is the player who knocks down the most in total.

I’ve linked this blogpost up with #CountryKids