You know when you take part in an organised children’s activity? And it is just so good and it makes you (and the children) so happy? And the organisers just get “it” and children so much? And it only costs a couple of pounds but you would happily have paid 10x more for what you got? And everything is such high quality and not one part of the whole event leaves you feeling you could have done it better, or that you wish you hadn’t bothered? Yeah that! That is what Fairytale Fun at Castell Henllys was like.

Castell Henllys is an Iron Age village set within thirty acres of beautiful woodland and river meadows in the heart of the Pembrokeshire Coast National Park.1 We visited whilst on holiday last week and I will write more about the place itself later. We went on the Friday of our holiday as there was an organised children’s activity being put on, with a fairy theme; so A was bound to love it! It did not have to be booked in advance so we just turned up and booked on the door when we arrived.

We met at the event start time, and we were greeted by two “wood nymphs”; they were very funny and friendly right from the start as the set the scene for the morning. They explained that we were going on a treasure hunt to find some lost/stolen “magical” items and we then headed to a part of the forest that seemed ordinarily closed to visitors; this forest location alone helped to set a magical scene, and there was a stone spiral on the ground that we were told was the entrance to fairyland. It was very cute and A was very excited!

We searched for all of the magical items, and although there was quite a large number of children, there were enough items for each child to find quite a few. The wood nymphs also ensured that latecomers had a chance to find items too. I was so impressed with the way it was run, even this early on. 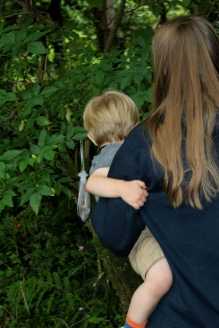 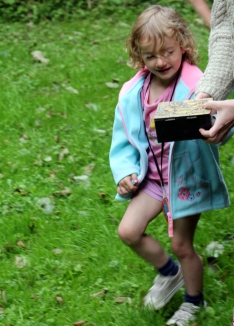 We then headed to another part of the wood, and took a seat on a tree stump in a clearing right next to the river, for the main activities. In the first part the children made a wand. The wands themselves had been pre-made and were waiting to be selected by the children. These were made from willow and the children had a choice of a simple straight version, or a version with a star shape on the end. Both A and E chose one with a star obviously! They then had to select some string to wrap around their wand in some way, as well as some rags (you have to understand that there was a whole back story to this, and everything represented something magical. The strings and the rags were hanging on trees over the river, and the children were able to select the ones they wanted and untie them before putting them on their wands in whatever way they chose; it was not a simple case of being handed items. I can’t remember the ins and outs of this back story though which is really annoying)! The wood nymphs then came around with glue and glitter and the children had chance to add this “fairy dust” to their wands if they wished. 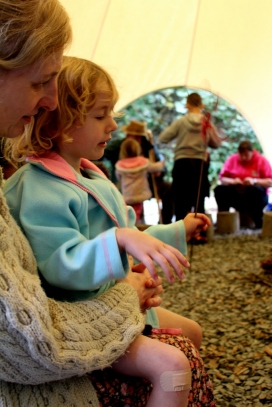 Once the wands were complete it was on to making fairy headdresses. The wood nymphs came around and made each child a willow crown that fit their heads perfectly. Naturally this took a bit of time, but it did not matter! It was fun to watch them bending and shaping the willow, and it was lovely just sitting in the beautiful location. A and E were very well behaved; I think they were in awe! Once they had been fitted for their crowns they had to decorate them with natural materials (flowers, leaves etc); however, a small number of beautiful colourful flowers were provided and each child was allowed to take a couple to start them off. While A and E were waiting to be fitted for their crowns they went foraging in the wood for some extra bits and pieces to go in.

When it was our turn E did not want to be fitted so he had one made that was roughly the size of his head, so it doesn’t fit as well as A’s, but A’s really did look magical. D did the threading of all of the foraged materials; I just couldn’t get it right! 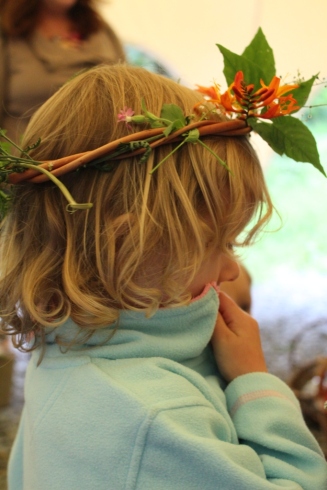 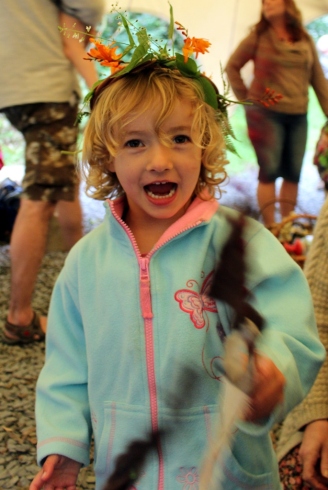 And it did not end there. Once everyone had finished their headdresses each child was offered face painting. A willingly took this up, but E did not want it (boys did not have to be fairies; there was an alternative face painting option, in case you were wondering)! 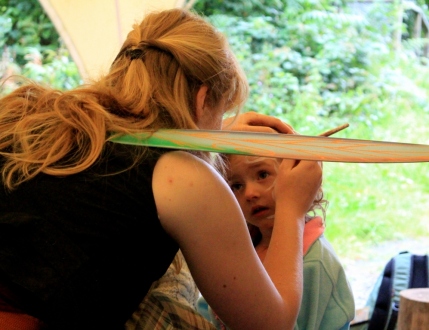 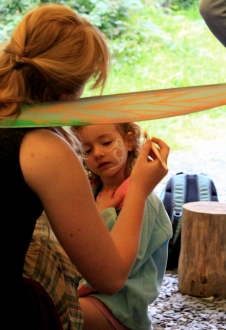 After this the children went to fairy school and were taught some spells, in Welsh (which means I don’t remember a word of it; Welsh does sound very magical though, it worked so well)!

Then they were given some wishes in their hands to blow into the river (I think these were some sort of seeds; again, I don’t remember the full story, but it was beautiful to watch all of the children so engrossed).

Finally, as each child was leaving they were given a “dragon stone” (gemstone) to take home “to protect them from the bad creatures that we had been discussing all morning”; again, I can’t for the life of me remember any of the Welsh words! 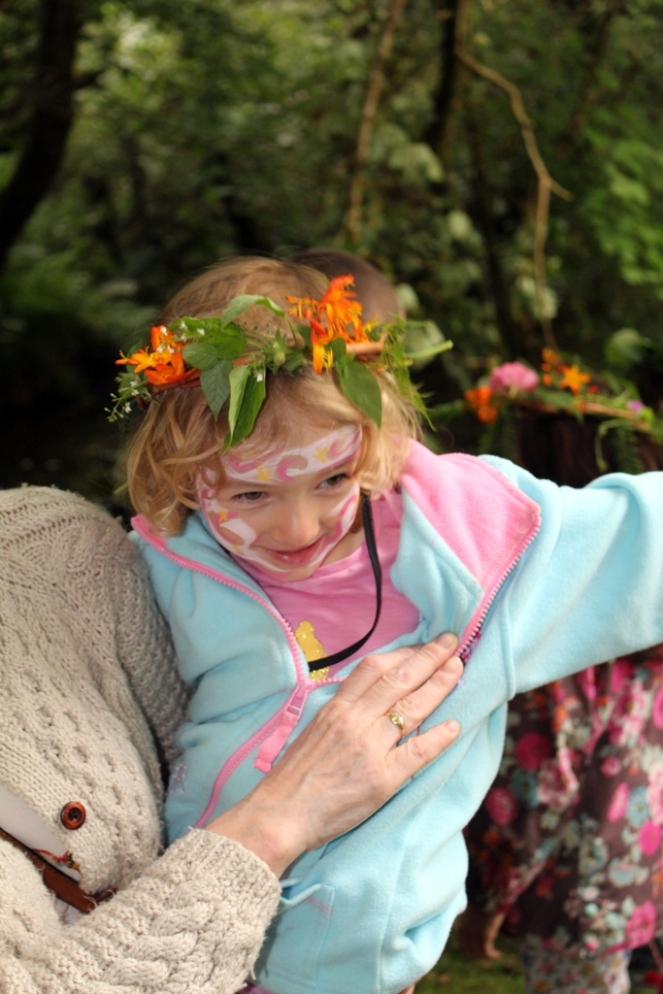 It was an absolutely wonderful activity, and one I haven’t stopped thinking about! I would definitely recommend this if you happen to be in the area in the next few weeks.