As part of our bear-themed week, we deemed an actual bear hunt a necessary activity! We are very lucky where we live as we have an amazing bear sculpture in the woods near our house, so this is quite easy for us to do, and, in fact, we go to see the bears often. However, I had hoped that on this occasion A and E would want to play “We’re Going on a Bear Hunt”; instead they wanted to feed the bears healthy food, just like the bears feed Goldilocks in “Eat Your Greens, Goldilocks” (another of the books that we are learning this week). So, instead, we foraged for some healthy food for the bears; A declared that this meant we had to find green food, as green food is the healthiest! We started by digging in the park. I am not sure that you find green food there but I thought I would let them explore! 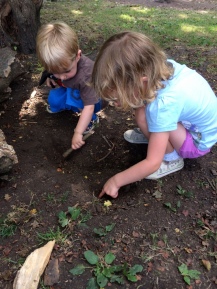 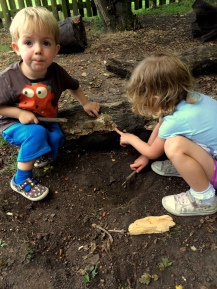 They discovered some fungus on a log. E excitedly exclaimed that he had found some barnacles! It was so cute and I was so impressed that he had remembered the word. And it really did look a bit like a patch of barnacles, but obviously we hadn’t miraculously found barnacles living 50 miles from the seaside so this led into a discussion about where barnacles live; we talked about places we had seen them before (about how Andy finds them on a whale’s tail under the sea on one of his Prehistoric Adventures, and how we found them in rock pools when we were on holiday by the seaside). In the end they concluded that it probably wasn’t barnacles that they had found. We did, however, find some acorns and A was very pleased about this:

Once we had found all that we could in the park we headed into the wood. 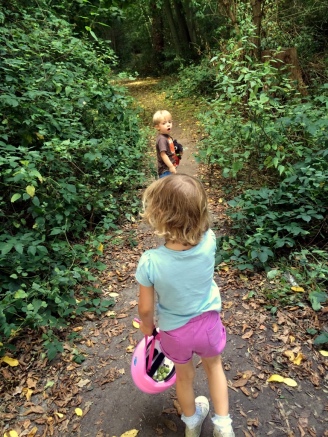 They collected bits and pieces in A’s cycle helmet!

And after a while we arrived at the bears!

They took it in turns to feed each one!

They were very lucky bears:

Once we had emptied our food store we headed home. I love that they both put their helmets back on. I hope you realise that I am still carrying both the scooter and the bike at this point, as well as the remains of our picnic and all of the other child paraphernalia!

On the way we passed the fairy tree and obviously had to check to see if they were home!

A and E also had to feed the crocodile, although he sadly doesn’t look much like a crocodile anymore as part of his mouth was broken off earlier in the summer. But that didn’t deter these two: 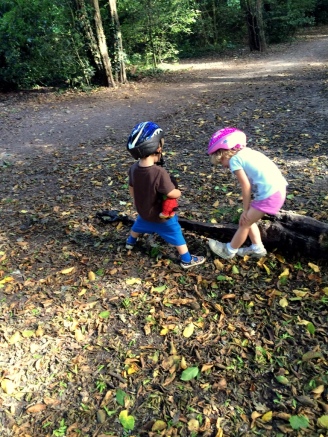 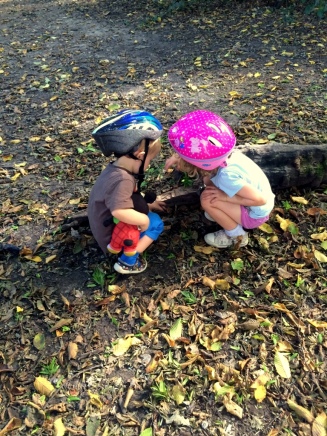 I have to admit, it was a really rather lovely afternoon. I love it when they both get an idea and run with it! Perfect child-led play!