I woke up this morning really wanting to make some Autumn play dough (as you do). It feels like a long time since we had a fresh batch in and, as it is half term, D is around to actually do the parenting. Therefore, I was able to spend the best part of three hours (yes, three hours) in the kitchen, ignoring my children and creating my masterpieces; how people do this sort of thing without another adult present is beyond me! At the start I let E help me weigh out the ingredients and stir, but once the boiling water and food colouring needed adding I locked myself away in the kitchen so as not to be disturbed!

My standard go-to play dough recipe is that by Anna at The Imagination Tree. The resulting play dough has the best texture of any others I have ever made, and it really does last for up to six months in a sealed container (unless you add perishable ingredients, as I often do).

When I started out today I knew that I wanted to make some orange Halloween-themed dough, but as I went along I decided to expand slightly and make a variety of Autumn colours, as well as making them scented too. You may be wondering what on earth I was thinking, but the results were quite impressive.

I followed the recipe without adding food colouring to the boiling water. Once the dough was ready, I divided it into four pieces and kneaded the required food colouring (and added extras) until the colour (and scent) was even and vibrant, and the texture was just right.

Once complete, I set up an invitation to play. I started with the brown dough and set up a tray with dried spaghetti pieces, pipe cleaner pieces, googly eyes, beads, some penne pasta pieces, and some pompoms for adding (a range of objects with a variety of textures for multi-sensory play). In my mind I was thinking about hedgehogs, but I decided not to make any suggestions and just let them use their imaginations and play freely!

E was the first up and he decided to make a monster. He started by squashing and squeezing, moulding and shaping the play dough for a while (and unknowingly helping him to build up his hand strength). He then added googly eyes (one of his favourite things) and lots of pasta (for arms, legs, a nose, and some hair). He absolutely loved adding all of the bits, and I couldn’t believe how long it kept him engaged for. 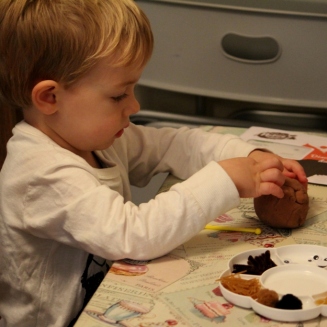 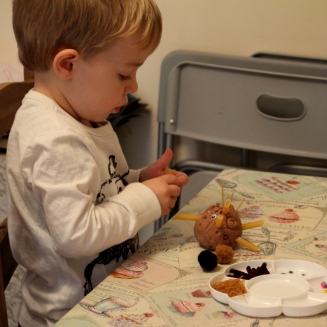 Even once he had finished his monster he was keen to continue, so we broke up the monster and started again. This time he decided to make a hedgehog (yay). He shaped it into a vague hedgehog shape, and then added googly eyes and the pieces of pipe cleaner for spikes. 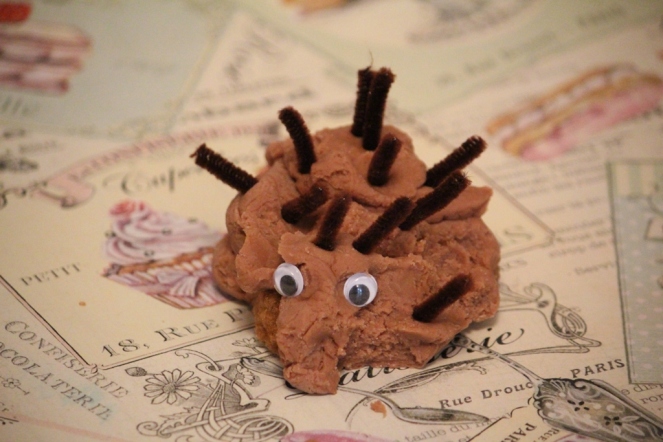 A was keen to join in once she returned from preschool. She set about making a hedgehog straight away, but she decided to use the pieces of spaghetti for the spikes instead. She also added a pompom nose before deciding that the pompoms made better ears, and added a bead nose instead. 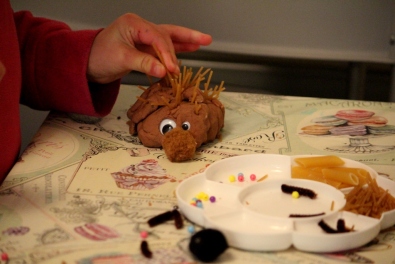 D and I also joined her in making a hedgehog. I found it amazing that we each made our hedgehogs a slightly different way! 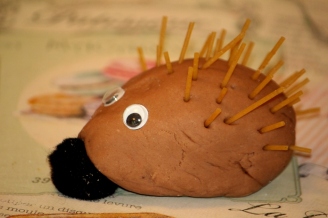 After a long time playing with the brown play dough, E asked for the orange. I therefore decided to change the contents of the tray slightly in order to set up a pumpkin invitation to play instead. For this I simply swapped the beads and pompoms for pieces of green pipe cleaner and black beans.

E attempted a pumpkin straight away, but A decided to start by making a monster! Again, they both enjoyed moulding and shaping the dough in their hands and pressing the different materials into it. They both loved the black beans in particular, and their smooth texture and vibrant black colour gave a really nice effect against the orange play dough. 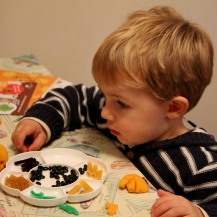 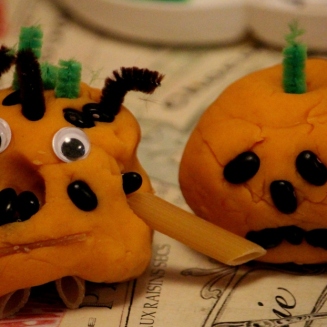 The best creation of the day, however, was D’s spider – he may have made me add this bit himself. 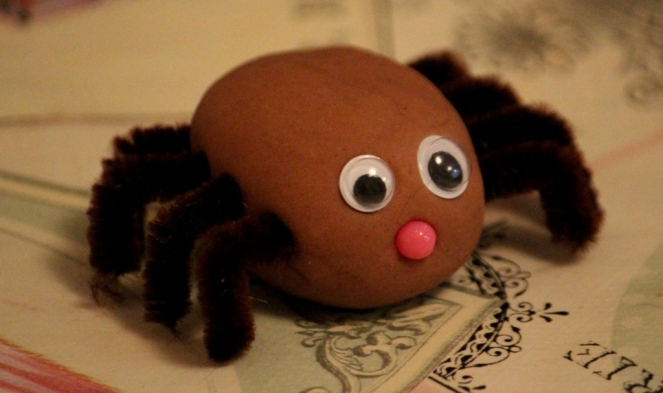 I love play dough. Apart from being very therapeutic, it also provides countless learning opportunities, and is great for developing fine motor skills!

Now I am just wondering what to do with our yellow and red batches!