In order to create this I took the black rice and starry button mix that we made early on in the summer, and added a few extra bits and pieces. To begin with I added some “fibre-optic ribbon lights” (left over from the event that I ran last week, before they were put away for next time), some sparkly pom poms, and some sparkly pipe cleaners. I set this up in the evening before and left it for them to discover when they woke up in the morning (mainly with the hope of an extra ten minutes in bed)!

As soon as A and E got up the next day they noticed this set up for them and excitedly got stuck in! 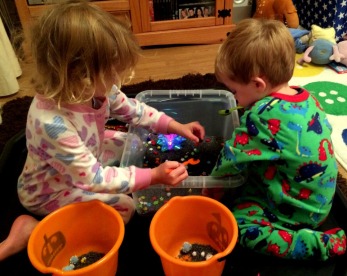 They got out their pumpkin buckets once again and began to explore. They used spoons to scoop up the pom poms and the buttons, and they used their hands to transfer the rice from the box to their buckets. To start with I just let them play as they pleased while I snoozed on the sofa (and pretended not to care about the mess); obviously this involved “making cakes” and serving each other some “food”.

They played for a long time, scooping and pouring the rice, mixing it with the pom poms, and even using the pipe cleaners as sparklers. I love these sparkly additions; they really reflect the light and “sparkle”, making a beautiful contrast with the black rice (just like fireworks bursting in the night sky).

After a while I decided to modify the contents of the box. I also moved their pumpkin buckets and asked them not to add anything else to the box. I was interested in seeing what they made of the box alone!

I replaced the pipe cleaners and about half of the pom poms with some glow-in-the-dark stars, some LED candles and some glow sticks.

To start with they simply explored the new additions. They both love glow sticks: 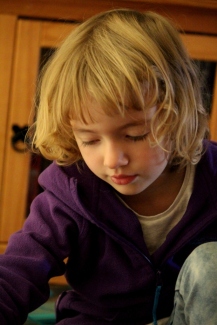 And they were fascinated by the candles; these candles are so clever – they flicker just like a real candle, yet are completely safe (providing you tape up the battery cover so that the children have absolutely no access to the very dangerous battery inside).

They used the glow sticks to move the rice around, and then began making firework shapes with the components in the box. 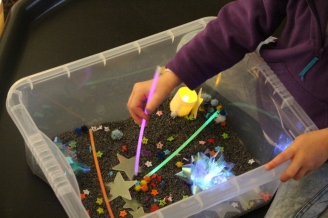 In the evening, after it got dark outside, I turned off the lights.

Both A and E loved this; interestingly, they decided to take the lit objects outside of the box itself and create on the black tuff spot instead.

They made a starry sky, filled with a variety of fireworks! 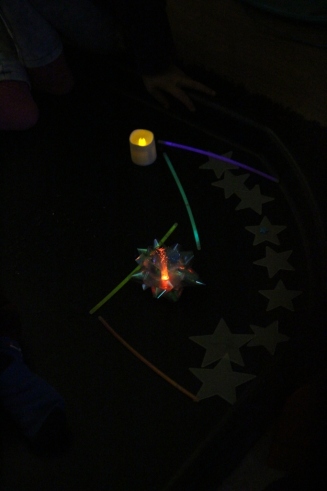 This ended up being a whole day’s worth of play, and required just a couple of small changes to keep up their interest!